As part of a special edition of Go magazine, we talked to Bernie Power about his experience of ‘call’.

How did you experience God’s call to cross-cultural service?

My initial “call” came in response to human need. I had been a follower of Christ for about four years, with a commitment to sharing the good news, when I attended a missions conference. The speaker told of the desperate need for the gospel among Muslim nations. I felt convicted in my heart that I could and should be part of God’s wider purposes in this matter. I did some short-term trips to check out possibilities overseas (none of which ultimately eventuated!), and then signed up for Bible college. From then a combination of nudges from the Holy Spirit, doors opening providentially, perceiving an alignment of my spiritual gifts and personality with potential roles, and a deep desire to serve God and to invest my life in significant ways led me to cross-cultural service. The advice and encouragement of others was a key part in my journey. It was a very fluid and yet intentional process.

How did you come to serve in the countries and roles where you’ve been?

We served overseas with Interserve for more than 21 years in four countries. In a couple of them, we were forced to leave by government order, a rather strange form of divine guidance! Looking back, we can see the Lord’s hand in those events, although it was hard to discern at the time. Our ministries were and are based on our professions – teaching for me and medicine for my wife. We are now living in Australia, having returned to help our sons settle into what was for them a foreign land. I teach Islamic studies at the Melbourne School of Theology and am involved in outreach and training with CultureConnect.

How have you seen God bear fruit as you’ve been obedient to him?

It has been exciting to see God actively working in the things He has called us to. We have, by His grace, been able to establish a clear gospel witness to our Muslim neighbours and friends in the different places we have lived. There have been many opportunities to influence individuals, families and communities for His sake. Some people have come to faith, grown in their discipleship and are reaching out to others. It was encouraging to see our Interserve teams grow, with more people being mobilised for mission and more ways of mission being developed. Having returned to Australia, it is heartening that God has opened up unforeseen paths of ministry through teaching, writing and evangelism to local and international Muslims. God never gives up on people if they desire to be used for His kingdom.

What advice would you give your younger self, starting out on this journey?

As I considered what advice I would give my younger self starting out on this journey, my initial thought was, “Relax and go with the flow”. However, on reflection, if I had done too much of that, I would probably not have been asked to write this article! So my more considered thoughts would be, “Trust God, step out in faith, be courageous, take the opportunities, don’t die wondering”. Other advice might be: “It doesn’t all depend on you. Jesus said, ‘I will build my church’. Let God be God.” This might seem contradictory, but I have discovered that there is a dynamic relationship between God and us which is described as “co-workers”. He takes our contribution seriously without needing to depend on it. Staying connected with God is the best way for that to happen, so that the glory goes to Him. 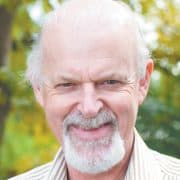 Dr Bernie Power is an Interserve Partner serving with CultureConnect and a lecturer in Islamic Studies at Melbourne School of Theology. His first book, Understanding Jesus and Muhammad, was just published.

“I have discovered that there is a dynamic relationship between God and us which is described as ‘co-workers’. He takes our contribution seriously without needing to depend on it.”

The church and the refugeePeople of peace
Scroll to top